I went to Sudbury, Suffolk recently, to see Gainsborough’s house.  Very interesting – we devised a slightly alternative version of his life, piecing together the concrete information.  I reckon he had quite a stressful working life, going to London early on (the right place for middle-class patrons) – whilst there he would have been obliged to get a posh studio in the right area whether he could afford it or not – posh clients wouldn’t want to be seen in a poor area.  Then he went to Bath – maybe that was a bit cheaper, but still posh – we wondered why he moved?  Then he returned to Sudbury and we wondered if that meant difficulties, not only in terms of making ends meet, but also he wasn’t entirely in line with Joshua Reynolds, the first principle of the R.A.  Looks like his brother (who had made enough money to live elsewhere) moved out and allowed him & family to live in the house their father had originally bought.  Looks like Gainsborough felt under pressure to keep up appearances as it were, and we did notice an increase of more ordinary local people in later portraits, so maybe he felt he had to take whatever work he could.  What really inspired him though was aristocratic ladies with a bit of va-va-vroom, like ‘Mary, Countess Howe’ – now there was a fabulous woman!

This is a fabulous retrospective of ben Nicholson’s first wife at Djanogly Gallery at Nottingham University.  First and foremost she was a terrific colourist, and also as an older person I found her inspirational as she remained so inspired, positive and interested in all things beautiful.    Her subjects are often flowers, typically in a jar on a window sill, but then she was left with four children to look after while Ben went off with Barbara Hepworth – so are we surprised her subjects are often home-based?  Anyway, I found the colour a real WOW!  It’s inspirational, and her flowers are thick gutsy affairs, playing beautifully against the immediate surroundings.  There are also her letters (nice friendly open handwriting). This show lifts the spirits – and it’s free. 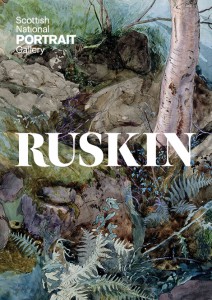 I visited this temporary exhibition whilst staying in Edinburgh for the Fringe.  I have been aware of Ruskin as an artist for a long time (not to mention his work as an art critic), but had never experienced a concentration of his paintings like this.  He is a superb craftsman, handling watercolour with extreme skill.  He is also very good at contrasting degrees of finish, with some parts of architectural imagery being highly finished and then towards the edges often ‘thin out’ into sketchy lines and washes.  This was a very worthwhile exhibition to see.

I’ve just been to Reykjavik, Iceland.  Amongst other things were some large and dramatic lava field landscapes by a Romantic Icelandic artist called Kjarval. 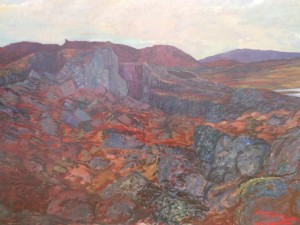 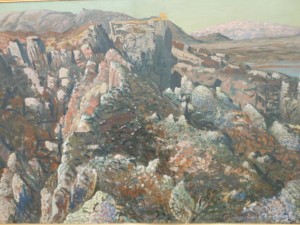 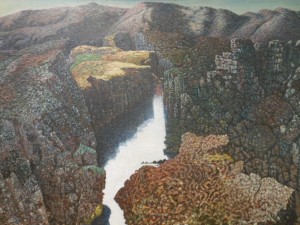