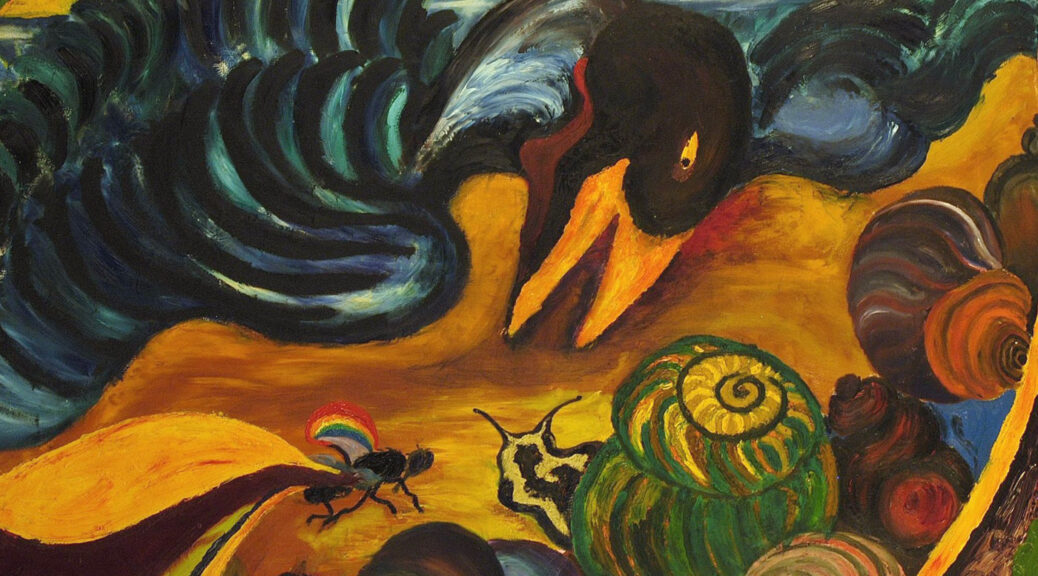 One of the most valued members of ArtSpace Loughborough, Chris English, sadly passed away in April 2021.

Chris was a poet who painted his poetry. His creative process usually started with writing poetry. Following this he would often start a painting with combinations of images and symbols from the poem. The poem and the painting became a linked pair.

You can view a gallery of some of his work, poems and paintings, at the bottom of this page.

Chris worked as a drawing office tracer before art college, but he always had a passion for painting and poetry, making his first oil paintings in the early 1970’s. Chris suffered from a cruelly debilitating health condition for most of his life. He faced this with great courage and determination not to allow his illness to define him. His art and writing were to do with storytelling about his own life and issues – storytelling with symbolist and surreal overtones. Chris was made redundant in 1985. The release from full time employment became the opportunity to follow his passion and, at the age of 35, he became a mature student and began to study for a degree in Fine Art at Loughborough College of Art & Design (now part of Loughborough University) in 1989.

Some of us first met Chris at college. Loughborough introduced a part-time Fine Art degree in 1988 and this gave students, who couldn’t commit to full-time hours, the opportunity to study. Mary Byrne started in 1988 and Chris and Erica Middleton the next year, all three in Painting. They shared studio spaces and discussions about work, and shared specific problems to do with being a part-time student. These were sometimes unforeseen problems! They all found it was impossible to progress as a practising artist if you literally worked part-time hours so they worked almost as hard – and sometimes harder – than full-timers. Part-timers could also be overlooked by staff in terms of appointments and time allotted for critiques, so all three had to learn to be vocal in voicing their presence! The other students were supportive and shared discussions about work.

Chris also met Nita Rao and Jemma Rix at college, as well as Tony Thory, Nita’s partner. All would later be members of ArtSpace.

There was a naïve quality about Chris’s work at the beginning but the staff who interviewed him probably recognised that he had something different and almost visionary to contribute. That vision sometimes got lost in the scramble to adhere to art training and Chris could feel persuaded that he had to put aside his real interests and focus on more conventional approaches. For his degree show, he mostly presented still lifes that play with shape and colour. As soon as he’d graduated, he returned to his real love, the more visionary, symbolist work.

In 1997, three years after Chris graduated, several Loughborough graduates, including Nita Rao (as well as her partner Tony Thory), Jemma Rix, Mary Byrne, Judith Eason, John Saunders and Lisa Denham decided to start a group to network, discuss art, and to exhibit and give workshops. This was the beginning of ArtSpace. Chris joined the following year. He was part of the organisation from then and exhibited in all our shows until his disability worsened recently.

It was through Chris’s vision and self-taught skills that ArtSpace first achieved a website, this in the days when websites were only created through bespoke coding and were rare or even unheard of for non-corporate organisations, and especially local art groups! The website developed year on year. From those early days it has been a key element to promote and define the group, building identity and promoting its members. Chris dedicated many hours in those early years to this task and achieved amazing search engine positions for the site, as well as helping other members to learn website authoring skills.

Mary, Judith and Jemma shared studio space with Chris for several years in Moira Street, Loughborough. The building was originally the stables for the historic house of John Heathcoat, the owner of the mill attacked by Luddite rioters in 1816. It was freezing in winter!

Chris always wrote as well as painted. He described what, for him, was the connection between the two kinds of creativity: ‘Ideas for the symbolism in my art derive from my poetry. Content of artwork is allegorical, full of metaphor, connotation and ambiguity. I start a painting with a combination of several images from a poem.’ His subjects were his unusual childhood in hospital wards and boarding school; and in adulthood, his sense of survival and sometimes isolation, and the difference between the inner life of feeling and thought and the outer life. His imagery links with Surrealism, as in stairs, doors, masks, games; sometimes this, what Chris called ‘symbolist’ imagery, is from nature – birds, insects, the sun and moon. The world created is dream-like, in bright colours and strong shapes.

2013 was the culmination of Chris’s work with a solo exhibition at Leicester Museum & Art Gallery. For the opening, he produced a glossy, colour publication of poems with their related paintings. Deborah Tyler-Bennett, Loughborough poet, novelist and critic, wrote a description of Chris’s poetry for the introduction.

A Word about Chris from Deborah Tyler-Bennett

I knew Chris English firstly as a friend, then as a creative writing WEA student.  Having seen his paintings first, it was a revelation to me that his poems were so symbiotic with them.  I’d experienced Chris’s work many times at exhibitions such as those by ArtSpace and loved their symbolism and vibrant colours.  They reminded me of symbolists like Gustave Moreau, and surrealists such as Leonora Carrington and Eileen Agar.  I was honoured when, in 2013, Chris asked me to write the introduction to his poetry for the catalogue of his work for Leicester’s New Walk Museum and Art Gallery exhibition.

When a poet or painter (or in Chris’s case, both) dies, you’re often left with a sense of regret that there’ll be no more work.  Nothing to marvel at again, wondering how or why they produced what they did.  In Chris’s case, I regret both the loss of how and why, but also mourn the departure of a kind, supportive, and funny human being, who I looked forward to meeting.  Re-visiting his work to write this tribute, I looked again at the paintings and poems, and realised that the personal landscape now reminded me as much of Samuel Palmer and William Blake as of Carrington or Moreau.

Chris told his own story in words and paint, true, but he also created a cast of vital and curious characters.  The landscapes he used were sometimes those of growing up, but also of an English pastoral seen via a symbolist eye.  In poetry and in prose there was always a new project, even in the most trying of circumstance.  Chris’s resilience and talent inspired me.  Just as he inspired and encouraged other writers in my group.  So, thank you, Chris, for the stories, colours, and places – and for putting yourself into work that was memorable, fizzed with life, and depicted both your inner landscapes and generosity of spirit.

Paintings and Poems by Chris English

Click on an image to see the painting and associated poem.